Although 1897 was one of the most important years in the life of Gene Debs, the available documentary sources are scarce. In the nearly 1800 pages that comprise Bob Constantine’s Letters of Eugene V. Debs, there are just two items from all of that year (plus the first half of 1898!), one letter and one telegram. No copies of the circular letters of the American Railway Union from the year survive, nor do minutes of its board of directors, nor internal documents of the state or local units of the organization. The same can be said for the Social Democracy of America which emerged in its aftermath — no stenographic record of its convention, nor minutes of its executive, nor internal communications to its members, nor documents of its local units. Nothing.

Historians are limited to newspaper accounts to attempt to deduce what happened and why. This is highly imperfect, to say the least, as political organizations tend to “put their best foot forward” (putting things mildly), hyping things like new local organizations formed and membership growth while ignoring internal dissension, local groups folding, and membership attrition.

On top of this there is the problem of sensationalized news coverage, sloppy or inept transcription, uneven coverage of public speeches and statements, and the fact that some material which appeared in print in smaller newspapers has been subsequently lost to time. None of this lends itself to accurate understanding of the internal realities of the organizations being studied.

With respect to the short-lived Social Democracy of America, all of this is a real problem. One must do the best one can with what one has. Maybe there’s something in an archive somewhere, but I’m certainly not seeing any traces of it.

The case of the Lattimer Massacre of September 1897 presents a really interesting historical question of its own.

Almost all of the big, bloody strikes of the late 19th and early 20th century have been studied to death by labor historians, with multiple journal articles, dissertations, and books. The archives have been probed, analysis has been made, and while one must always keep a finger to the wind for the biases of each historian and examples of tendentious or unfairly skewed coverage, in general it is a known and charted world.

The summer of 1897 was marked by a huge nationwide strike of coal miners over tumbling wages — a strike in which Gene Debs had become involved at the invitation of mineworkers’ union officials, touring West Virginia and Pennsylvania and using his five star oratorical skills in the attempt to make isolated work stoppages more general and to thereby force mine owners to the negotiating table for the adoption of a more equitable universal wage scale.

On September 10, 1897, a few hundred striking miners, almost all Slavic or Baltic immigrants — coal mining was a difficult and dirty job that paid poorly, and new immigrants to America were the most apt to accept such miserable conditions and remuneration — marched in the hot summer sun from their village of Harwood to the Lattimer mines on the northeast side of the neighboring town of Hazelton, six miles away. The strikers were attempting to call out their fellow immigrant miners to join the strike.

The marchers were met by Luzerne County Sheriff James L. Martin and a posse of about two dozen heavily armed and poorly trained deputies, Winchesters at the ready and spoiling for a fight. A scuffle ensued. The deputies opened fire, shooting to kill. There were bodies everywhere and dozens of wounded miners were dragged away by their comrades. It was a catastrophe.

Where does that come from?

There’s exactly one book on the topic, written by an author who declares not once but twice that he is “not a historian.” Michael Novak (1933-2017) was rather a theologian and philosopher, the author of 40 books, including The Guns of Lattimer, a footnote-free work published by Basic Books in 1978 which does not cite the one dissertation on the topic. He said the body count was 19.

How did he come up that number? I’m glad you asked.

“Lists made in 1897-98 show many discrepancies in numbers, persons, and spellings. Often they confused the hospitalized wounded with the dead or dying. The above list [of 19 surnames] is based upon known gravesites.”

You have got to be kidding me. No serious historian — let me emphasize that: NO SERIOUS HISTORIAN — would use that methodology to generate a body count. I’ll take the list of 21 people in the New York Herald, Sept. 12, 1897, page 3 myself, which provides first and last names, age, and cause of death in a big list. If you want to supplement that with additional “known headstones” — presumably of those who were taken from the scene wounded and who subsequently died — that’s completely reasonable methodology.

The number 25 would be in the ballpark, it would seem. I haven’t worked it through.

P.S. The deputies were acquitted of all charges in court. Some things never change.

Here’s a little snippet of Debs doing his thing at Ferris Wheel Park in the summer of 1897. It gives a pretty good feel for his core religiosity. 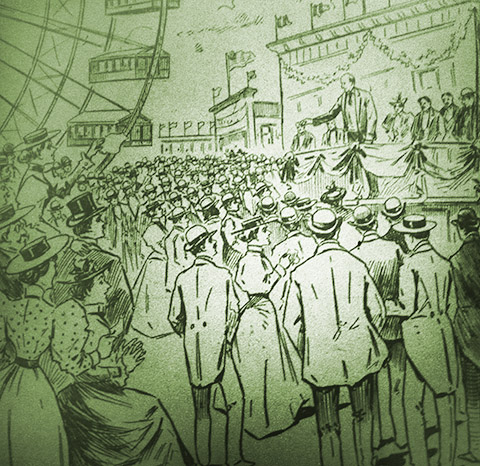 “There are two social and economic systems which have been conflicting since the morning stars sang together and the son of God shouted forth their joy. Under one system the few have enjoyed the fruits of the earth and the masses have been doomed to serve as beasts of burden. The beneficiaries of this system believe, for the most part, and honestly, that a system under which the few rule and the masses toil and submit to their masters in silence is on the whole a good system. It is a system, however, which has filed the world with unspeakable woe, and it is needless to say that it is under this system we now live. There is another system under which there is no favored class, no special privileges, where the earth and the fullness thereof becomes the heritage of the common people. (Applause.)

“Under this system economic freedom will be established and the brotherhood of man will be inaugurated. The most ardent supporters of the present system are bound to admit that it is a disastrous failure. On the one hand it has produced thousands of millionaires and upon the other its millions of mendicants, and this process is in operation during all the circling hours of the day, the week, the month, and the year. There are those who believe, and I am among them, that the time has come to supplant this system with the cooperative system under which men shall work together for the common uplifting of our common humanity.” (Cheers.)

The deadline for Eugene V. Debs Selected Works: Volume 3 is October 15, 2018. I’m setting a soft deadline of August 1 to finish the document compilation phase of the project. This means there are now 22 more Saturdays after today to get the core content section of the book assembled, with a limit for publication of approximately 260,000 words.

I also managed to locate and finish typing up the constitution of the Social Democracy of America for background and managed to sling a couple thousand words towards a Volume 3 introduction.

★ Not exactly a new acquisition, but a new discovery in my pamphlet boxes… I was typing up a short report of a Debs speech this week and it reported him making a clear plug to his audience to spend “six cents” to buy a copy of the book Merrie England. “That’s a really weird price,” I thought, “I wonder what that’s about?”

I have probably about half a dozen copies of Merrie England, which was regarded as a socialist classic during the 1890s and which was frequently reprinted. Lo and behold, I have an edition of the 190 page paperback with the really weird price of exactly six cents — featuring an introduction by none other than Eugene V. Debs!

That, my friends, is called a major score…