The 1900 Kansas newspaper clipping above is pretty harsh — one of the more over-the-top vilifications of EVD that I’ve seen, truth be told. Generally the local press around the turn of the century was either neutral or friendly to Debs-the-lecturer — applauding his tenor and earnestness and professionalism on the platform, even if not agreeing fully or at all with his ameliorative prescriptions. Debs-the-trade-union-leader they were less crazy about just a few years before…

In addition to venom-laced pans, there was enthusiastic coverage as well. I bumped into a really remarkable opinion piece in one of the Debs scrapbooks preserved on reel 9 of the Papers of Eugene V. Debs microfilm and thought I’d share it here since I’m not quite sure that there will be an opportunity to put it into play otherwise. The article is from the Augusta [GA] Herald of February 12, 1900, and bears a fantastic title:

EUGENE V. DEBS, THE BRAINIEST AND TRUEST OF AMERICAN MANHOOD, OR ONE OF THE MOST DANGEROUS MEN IN THE REPUBLIC.

Eugene Debs is a remarkable man. As a speaker he is ingratiating. I went to hear him on a subject in which I though I had no interest whatever. Leaving his presence, I was full of thoughts of him

Drawing of Gene Debs from the New Orleans Times-Democrat, Jan. 26, 1900

It has been 18 hours since I heard him. There has been scarcely an hour of that time when I have not been pondering over something of or about him. I went to hear him to record what he said — in the capacity of a callous reporter. I find myself today pondering over either the manner of his statements, or his statements themselves, looking around for his books and for literature on the subjects he talked about.

He begged his hearers not to accept his conclusions. He set up for himself the standard of any ordinary thinking man who had delved down in industrial problems of the day. The opinions he has formed are his only and he does not ask you to coincide with them simply because they are his opinions. But he implores you to study as he has studied.

He appeals to no passion, he says; he plays on no prejudice, he maintains. He contends that he merely states his conclusions and runs over with you the reasoning which brought him up to them. He bases his prophesies for the future on actualities of the past.

Having heard him one is sure, for a long time, to think of him and about what he said.

One does not know but it is the man more than his subject that rivets attention. That he is a remarkable man is illustrated by the fact that for two hours, on a cold, rainy, slushy day, the largest kind of an audience gave him hearing, intensely drinking in every word.

The afternoon and environment was cheerless enough. The two lower floors of the theater were packed. There were but 21 men who left the building while the lecture was in progress.

He told no funny story. He attempted no flight of oratory. The theater was not healed. There was no music. He did no acting. But there was not a moment when his hearers did not warm for him.

He is frank. He is sincere. He believes he is right. He carries you along step by step, convincing you as he progresses, almost manacling you at the conclusion unless you throw off the influence of his earnestness and silence the sound of his words.

While there was no oratory, his tribute to labor was a beautiful grouping of words, charmingly spoken, influential because ringing with truth. Now and then he recited, apropos of some statement, the production of some poet. He does not recite poetry well. Yet each recitation was charming.

His enunciation is as near perfection as can be. You never miss a word. His pronunciation is cultured. His gestures are awkward, but you forget that. His physical attitude on the platform is peculiar at times. He is tall, long face, with high, intellectual forehead. He bends his figure a bit and lowers his head, but keeps his eyes upon his hearers. His arm is long. He points in emphasis. But this does not grate upon you. You do not think of it. You have just heard an interesting statement. It is plainly made. He gives you opportunities to resolve it in your mind. You think of nothing but desire to catch the next utterance. Having heard it, you want to hear the next, and so on. You do not tire….

I was gonna write about the internal politics of the Socialist Labor Party from 1897 to 1899 this week, but my attention ended up moving elsewhere. I’ll get around to that topic somewhere down the line.

I’m now completely done with Debs for 1899 and have started to work a bit on 1900 which to my way of thinking really marks the start of his tenure as a full-throated Marxist. Even though this may sound like an interesting observation, I don’t fell like I’m quite ready to riff on that topic quite yet as I’m only now starting to flesh out his 1900 timeline.

I do keep a pretty meticulous timeline to go with my (crazy-good) database of Debs articles — it is now heading for 14,000 words for the 1877 to 1900 period alone. I’m trying to keep track of every road trip that he took, every place that he spoke, and basic details about each.

Oct. 16. — BUTTE, MT to a packed house at the Auditorium. No admission. Introduced by Patrick Kane, VP of the Silver Bow Trades and Labor Assembly.

Rossland, British Columbia is a mining town on the province’s southern border, about 15 miles north of Northport, WA.

Oct. 26. — VANCOUVER, BC at New Labor Hall on “Labor and Liberty.” Arrived in city at 6 and went on stage at 7:30.  Introduced by Ralph Smith MPP of Nanaimo, Pres. of Dominion Trades Congress. Spoke for nearly 3 hours to a crowd of 400 at the former Methodist church relaunched as a labor hall.

Oct 30. — He was on a train leaving Portland, OR. Apparently no speaking date there, traveling direct from Seattle to SF. 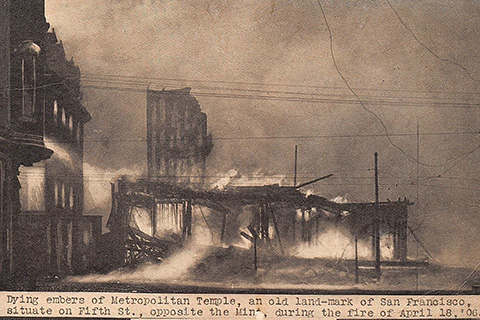 The Metropolitan Temple, site of EVD’s speech on Halloween night in 1899, was obliterated by the Great San Francisco Earthquake of April 1906.

Oct. 31, 1899. — SAN FRANCISCO, CA in evening at Metropolitan Temple, auspices SDP. Visit sponsored by donations of individuals and unions, including Mayor James D. Phelan, and Brewery Workmen (who paraded to the speech with a brass band), Carpenters, Typographers, Coopers, Woodworkers, Bricklayers, Horseshoers, Cloakmakers, Milkers, and Paperhangers. Debs’ train was late so he arrived on stage at 9 pm; packed house. Debs was traveling with his manager, Louis W. Rogers.

Nov. 2. — POMONA, CA scheduled. Arrives in LA on the morning of the 2nd, so the other SoCal events may not have happened.

Nov. 7. U — OAKLAND, CA in front of large audience in Exposition Building, free.

Nov 12. — FULL MEETING OF THE NATIONAL EXECUTIVE BOARD at Chicago, with Cox Chairman, also Debs, Berger, Heath, Stedman. This meeting set the basis for representation at the forthcoming National Convention, first Tuesday in March, 1900. One vote for each member in good standing, with individuals assigning signatures to delegate credentials. Branches not sending representatives to assign votes by proxy (with signatures) to others attending. All delegates at least 30 days of party membership prior to opening of convention. All signatures to be certified by Chairman or Sec. of branches in question. This system to be ratified by membership in a mail vote closing Dec. 20, with count on Dec. 21. Debs also made a verbal report on the NW and Pacific lecture tour. Discussion of dissident SLP appeal, statement in response assigned to Berger and Heath.

It’s pretty easy to see how such a timeline can get out of hand for a guy that was on the road as much as Debs was, is it not? 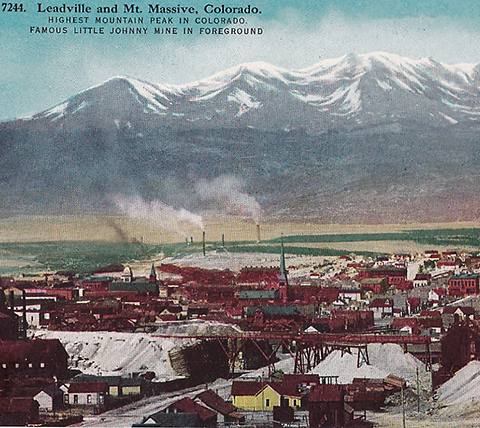 After finishing the rest of the 1899 film is circle back to a series of seven articles that EVD wrote for The Western Miner, the weekly newspaper of the Cloud City Miners’ Union — the organization that led the Leadville, Colorado silver strike of 1896-97. I had previously committed just one of these seven articles to type and left the other six on the proverbial cutting room floor. And that started to really bug me…

So I went back and found the material again and started work, with a view to getting all seven articles typed up, even if some of them are not used in the book. It’s hard to say one way or the other at this juncture whether they fit — but I can say that it’s important and rare Debs writing that needs to be preserved on Marxists Internet Archive even if it doesn’t end up making Volume 3.

I’ve still got half a day of typing to finish up the series but am really glad that I took the time to go back and get that done. There was some good stuff I was missing.

The deadline for Eugene V. Debs Selected Works: Volume 3 is October 15, 2018. I’m setting a soft deadline of August 1 to finish the document compilation phase of the project. This means there are now 16 more Saturdays after today to get the core content section of the book assembled, with a limit for publication of approximately 260,000 words.

I also typed up for background a 1,300 word statement by an anti-unity faction of the Social Democratic Party appearing in the Jewish Daily Forward and written by a committee including Louis Miller as well as a 300 word piece detailing a split of the Debs-for-President campaign committee in the summer of 1900.

THE BIGGEST REPOSITORY OF DEBS MATERIAL ON THE INTERNET is located at Marxists Internet Archive, curated by David Walters. Here’s the link if you want to track down an article or explore the Debs body of work…