What the hell does Morris Hillquit have to do with Eugene V. Debs in 1903?

Not too much. The two were, after all, still just learning not to instinctively distrust one other.

Debs had his people he didn’t like and Morris Hillquit (1869-1933) was briefly on that list, being nearly 15 years younger and exhibiting a smoothness that seemed to smack of duplicity. For his part Hillquit realized full well that Debs, in addition to being a brilliant public speaker and very passable writer of socialist propaganda, was behind the scenes a bit of a factional pugilist — one with a bit of an ego to boot. Hillquit being a recent defector from the organization that had degenerated into a Daniel DeLeon Cult was naturally on his guard with respect to heroes and hero-worshippers.

The relations between Debs and Hillquit were apparently tense in 1901 and seem to have gradually eased up over the next couple years. It did take time.

I’m not quite ready to tell the full story of Hillquit and Debs here, that information will necessarily come in dribs and drabs. For the moment I would like to share an interesting little book review that I found. 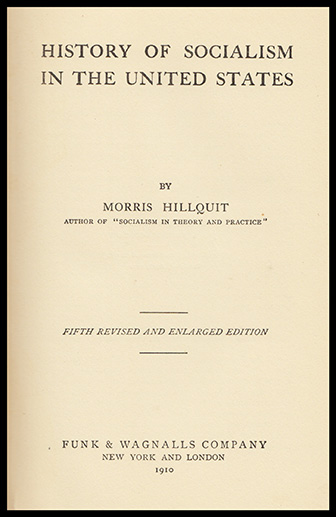 Morris Hillquit’s 1903 book, History of Socialism in the United States, was translated into German, Finnish, Russian, Yiddish, Polish, and Chinese and went through five American editions, the last of which included a new chapter.

In 1903 Hillquit published a history of the socialist movement in America with the very mainstream publisher Funk & Wagnall’s, of New York City. It is a thick, well researched, pioneering book with particular strength in its coverage of the communal period of American socialist history, including especially the schemes of  Robert Owen and the Fourierites.

Hillquit’s book as a source for understanding the internal politics of 1900-1903? Forget about it. Hillquit doesn’t even mention that the Chicago Social Democratic Party held an emergency convention in January 1901, initially to stop merger with the Springfield organization, later to dictate terms of the merger as best it was able, understanding that it would be the minority in any future merged party.

Here’s the interesting section of a spin-drenched review from Victor Berger’s Social Democratic Herald, probably written by editor and Chicago SDP Executive Board member Frederic Heath, that I think helps shed some light on the perspective of the Chicago SDP leadership, which clearly appreciated Hillquit’s discretion. Heath or Berger wrote:

[Hillquit’s book] is a very well told and complete history of the rise of Social Democracy in the United States and will doubtless do its part to dispel the many guesses and absurdities that find their way into print in capitalist paper and book about American Socialism. *  *  *

In 1874 a Social Democratic Workingmen’s Party was formed, which three years later changed its name to the Socialist Labor Party. As the years went by a spirit of bossism and sectarianism developed in the party, finally resulting in alienating many Socialists from it. So widespread was the dissatisfaction with the intolerant spirit of the party that in 1897 there was organized at Chicago the Social Democracy of America, known as the Debs party, which rapidly grew in membership and influence.

This Social Democratic Party [sic.] avoided conflict as much as possible with the Socialist Labor Party, but their relations were none too pleasant.

In 1899 a clash between factions in the latter party led to a split, one fraction of which, beaten in the courts in a contest for legal supremacy, made overtures to the Social Democrats for an amalgamation, practically proposing that a new party be formed. This was resisted by the Social Democrats, who were loath to give up their successful organization, and fearful that such a union would bring too much of the Socialist Labor Party spirit along with it.

This absurd situation was finally terminated in 1901 when a joint convention was held and the Socialist Party launched, with the understanding that in New York and Wisconsin, for legal reasons, the party name Social Democratic Party should be retained.

Comrade Hillquit, although naturally seeing the contest from the Socialist Labor Party fraction side, has described these turbulent events with a good deal of tact, and deserves credit for doing so…. (Source: “From the Book Table,” Social Democratic Herald [Milwaukee], vol. 6, no. 31, whole no. 278 (Nov. 28, 1903), pg. 4.)

Morris Hillquit was ever the diplomat. If the best adjective for Gene Debs was “earnest,” the best adjective for Hillquit was “diplomatic,” closely followed by “measured” and “temperate.” The socialist fire burned bright, mind you, and when rhetoric came into conflict with reality during World War I, Hillquit did not flinch — unlike the host of middle class intellectual defectors to Wilsonian militarism, with whom he is often wrongly associated.

Nevertheless, Hillquit’s natural tendency to diplomacy in pursuit of a long range strategy, combined with the chronological proximity of the events being described, was not conducive to his writing a solid historiography of the two rival Social Democratic Parties.

That is a pity, as he had a front row seat to that bit of history. 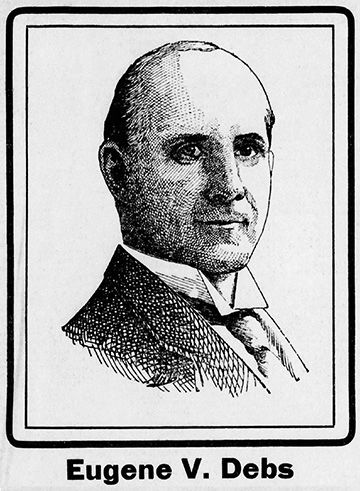 Unusual portrait of Debs used in connection with advertising for his Oct. 9, 1903 speech at in Austin, Texas under the auspices of the Austin Lyceum Society. Admission prices for the lecture were 50 cents for the gallery and an astounding $1 for seats on the main floor. Tickets for Debs speeches were regularly 50 cents in 1903 and 1904, years when he was managed by a commercial lecture bureau, rather than the common 25 cent price of earlier years when he hired his own manager.

I’m always on the lookout for unusual news accounts of Debs speeches or personal interactions and spotted a nice little piece in the Ottawa Evening Herald, issue of Jan. 15, 1904, the day following a Debs speech at the Rohrbach Opera House.

Eugene V. Debs arrived yesterday over the Santa Fe and put up at the Crane Tavern, where he remained overnight. Shortly after registering, he took a short walk around town and his dress and general appearance gave every indication of the laboring man, whose interests he represents. He stands over six feet tall, is slender and raw-boned. He was dressed in a coarse suit of mixed goods, the trousers of which were rolled up at the bottom, showing off to good advantage a heavy shoe of about number 12 size. He word a long ulster overcoat and a winter cap. His tie was a ready tied unconventional affair and his collar might have been celluloid. Few persons took him for a lecturer as he walked the street, but when he was seen by a Herald reporter, he was in a very talkative mood.

The impromptu interview which followed actually included a little bombshell about Debs thinking that newspaper magnate William Randolph Hearst, then in his trust-busting-friend-of-labor phase, would be an unacceptable candidate for the Presidency from the perspective of the organized labor movement. That news got a little bit of play from the wire services, with the words vanishing into the ether in a couple of days.

As for Debs’ speech in Ottawa, a town of about 7,500 people located in the Eastern part of the Kansas, the paper noted:

Mr. Debs is not a polished orator, but a straight-forward ready talker, speaking at one time slowly and deliberately and at the next minute like a woman at a sewing society. Mr. Debs is a socialist and makes no apologies for it.

The word “earnest” wasn’t used, but it might as well have been.

I’m always prowling ebay in search of additions for my library and radical ephemera collection and came across this copy of this letter from Theodore Debs to James “Jim” Oneal, editor of The New Leader. Oneal — for many years one of the top leaders of the conservative pro-union, anti-communist SP “regulars” — hailed originally from Terre Haute and had been with the Debs brothers ever since their Social Democratic Party days of 1898.

I put in my bid for the piece, but the selling prices of Debs material can be very, very stupid, so I figured I had better filch the image and get the material into the historical record here before this is locked up forever in somebody else’s collection.

I drop you this line to thank you sincerely for Gene and myself for your perfectly fine and appreciative tribute to Gene in your splendid article in the issue of the New Leader of the 7th inst. [Nov. 7, 1925]. We have both read the article with keener interest and more appreciation than could be expressed in words, and Gene would write you were we not swamped with letters due to our absence and were Gene not required to leave again to fill a series of speaking engagements in Illinois with not half time enough to clear away the accumulation.

If you have occasion to see or write Joseph Shipley I wish you would kindly say to him that we read his masterly poem dedicated to Gene in the same issue with our hearts throbbing with responsive emotions and that Gene and I and all of us are deeply sensible of the high honor bestowed in the personal dedication of this wonderful poem, and that we return our deepest thanks with the assurance of our sincere regard and esteem.

Will you kindly send me half a dozen copies of this issue (the form containing the matter above referred to) if you can spare them and very much oblige.

Theodore was, of course, Gene’s younger brother and personal secretary for most of his life.

The deadline for Eugene V. Debs Selected Works: Volume 3 is October 15, 2018. I’m setting a soft deadline of August 1 to finish the document compilation phase of the project. This means there are now 5 more Saturdays after today to get the core content section of the book assembled, with a limit for publication of approximately 260,000 words.

The above material — along with fairly vast numbers of other Debs speeches and articles — is available for free download via Marxists Internet Archive <www.marxists.org>