• Hey, nice photo of a train wreck from the 1888 Burlington strike, eh? I actually bumped into this on Wikimedia Commons, it was an image originating in a book that I had been working with to write the WP article on that extremely important Debs-related event. Twenty minutes of Photoshop editing it starts to look pretty compelling, does it not? The image is of the aftermath of a collision which took place on Feb. 27, 1888 (the day of the start of the strike) at the crossing of the Chicago, Milwaukee & St. Paul Railroad’s line. The Chicago, Burlington & Quincy was subject to a labor stoppage on that day by its engineers and firemen who wanted to be paid a flat rate by the mile like other competing lines running out of Chicago instead of according to a complex company rate book that factored in difficulty of each route, trip length, cargo, and tenure of the employee. 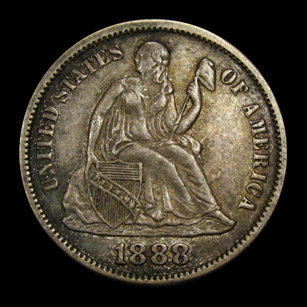 I must be getting old because I’m starting to prefer toned coins like this instead of those that are dipped to be “bright white.”

Not accidentally, under the Burlington pay system the employees of the CB&Q wound up being paid significantly less than did equivalent employees on rival lines. Also not accidentally, the CB&Q was an extremely profitable business concern in this period and was in no hurry to change their economically advantageous pay system.

Just about every single engineer and fireman joined the stoppage — more than 97% of the road’s 2,100-some-odd cab employees took part. With the key running employees off the job, the company pressed everybody and their dog into service, putting pencil-pushers and maintenance workers and conductors and foremen behind the throttle and at the shovel in an attempt to keep the line running. Some trains went BOOM as a result, because not every pencil-pusher can run a train safely. BOOM!!!

The strike was extremely bitter and lasted until early January 1889. It ended with the railroad achieving retention of its established pay system, but the privilege cost them an estimated $5 million in lost business. Some of the striking employees were rehired, many others were replaced. Everybody lost out. So it goes. 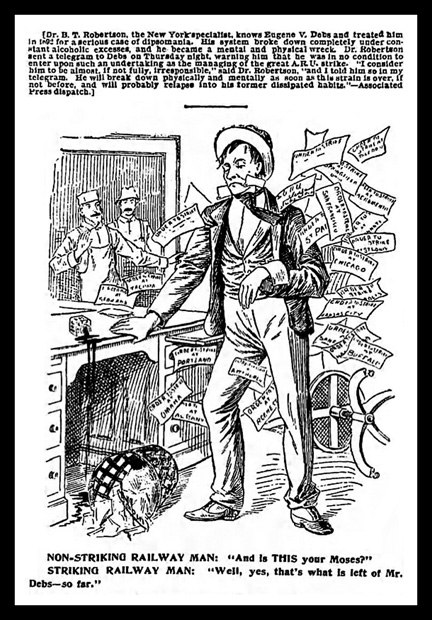 • I found a pretty nice example of the vilification that Debs had to face in the press during the height of the 1894 Pullman boycott, when he was for a time Public Enemy No. 1. The cartoon, from the front page of the right wing Los Angeles Times of July 11, 1894, reprints a bogus “Associated Press dispatch” that reads: “Dr. B.T. Robertson, the New York specialist, knows Eugene V. Debs and treated him in past for a serious case of dipsomania [alcoholism]. His system broke down completely under constant alcoholic excess, and he became a mental and physical wreck. Dr. Robertson sent a telegram to Debs on Thursday night, warning him that he was in no condition to enter upon such an undertaking as the managing of the great ARU strike. ‘I consider him to be almost, if not fully, irresponsible,’ said Dr. Robertson, ‘and I told him so in my telegram. He will break down physically and mentally as soon as the strain is over, if not before, and will probably relapse into his former dissipated habits.’”

The drawing depicts a drunken Debs knocking over his ink pot and trashing his office amidst a maniacal fluttering array of strike orders. You should be able to make out the cartoon’s caption pretty clearly. “Fake News” and bogus pictorial memes are no recent invention…

• I spent one of my three book-work days reading and working a bit on the American Labor Union page on Wikipedia, uploading convention proceedings for the ALU, the IWW, and the Western Federation of Miners to Archive.org, and compiling scanned pages of the New York Call, a Socialist Party daily newspaper, into pdf files. This stuff actually does relate to the Debs project, but only to later volumes. I have to watch myself so that I don’t get sidetracked — which is an old time railroading term, by the way. I learned a lot about Western miner radicalism, but this isn’t the time to fully debrief on it… 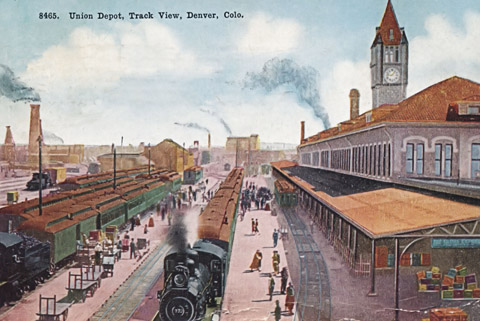 Denver was center of metal mining — including companies which manufactured heavy industrial equipment for that burgeoning industry. Denver was the locus of the wealth extracted by that hard rock mining and the site of conflict between the owning class and the working class.

Denver was to San Francisco as Chicago was to New York City. So it makes perfect sense that it would emerge as  the headquarters city of the organizational center of western trade union radicalism, the Western Federation of Miners and the trade union federation it launched, the American Labor Union.

• 10 more Saturdays to go until we hit the July 1 target for the end of production of of Debs-written editable text. There are still 195 article pdfs remaining to be processed (or rejected at second reading)…

• We’ve started cutting the 1877-1885 material. I did a physical printout of articles and got my sharpie marking… We’re looking at something in the range of 75 to 100 pages out of 700 or so dedicated to the early “conservative labor editor” stuff. David pulled one back from the burn barrel but we’re still sitting north of 100 pages and need to sharpen our knives. 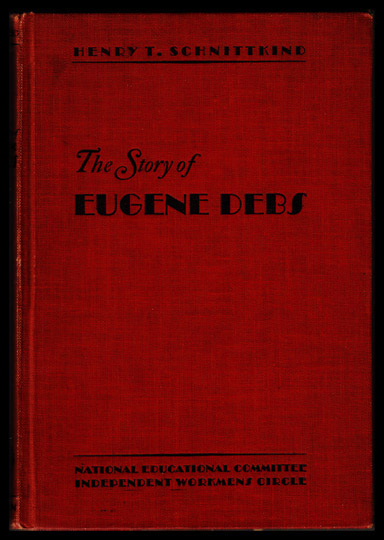 • My new library acquisitions this week included what has proven to be one of the most zany Debs items out there. The Story of Eugene Debs is a book by Henry T. Schnittkind, published in 1929, just a few years after EVD’s death. I’ve known of it for a while but hadn’t made getting a copy a priority, as it was said to be a children’s book — which is true. It was my understanding that it was published by the Workman’s Circle, a Jewish-Socialist fraternal benefit society based in New York City that was very closely tied to the Socialist Party of America. Which is to say: No big whoop. This turned out to be rather less true, as the book was actually published by the Independent Workmen’s Circle, not the Workmen’s Circle — a Communist-sponsored factional split-group that was transformed into the International Workers Order in 1930. In other words, this is a Communist book for kiddies rather than a Socialist book for kiddies, which makes it way, way, way more interesting from where I’m sitting.

Here’s where the story gets fascinating. This was book 1 of a projected 4 volume set of biographies called “Heroes of Peace and Liberty.” The other biographical subjects were to include Tolstoy, Socrates, and Lenin. What a peculiar set of four! But that’s not the good part. Here it is: virtually every single word of The Story of Eugene V. Debs is flat-out, unflinching, completely unapologetic fiction! Dialogs and incidents that are completely unmentioned in the literature are created from whole cloth — here and there a name, a factual date, and an odd quote plucked from the historical record, buried beneath wheelbarrow-loads of imagined events and contrived dialog worthy of the worst of Based On A True Story™ Hollywood screenwriting.

Take this exposition on the inner thoughts of little Gene, for instance:

“The Civil War was over at last, and people once more came to their senses. The North and the South shook hands, they apologized for having killed so many of the strongest and the most beautiful of the young men of the country, and everything was all right again. Everybody was happy, except the young fellows that had been killed in the war….

“Gene thought it very silly for old people to send young people to their death, and to make up a great speech about them afterwards. But, then, Gene was only nine years old, and so he kept his thoughts to himself. It wouldn’t do to tell grown-ups what you thought of them. They were so much bigger and stronger than you. They might get angry and give you a good spanking.

“But he kept his eyes open, and every day he learned more and more about the world….”

And so on and so forth. Just one after another after another made up incident designed to teach the children to whom the book was read or who read the book about the exciting life of pacifist-boy-genius-youth-orator Gene Debs and his adventures, teaching valuable lessons about war and capitalism all the while, culminating in “old Mr. Wilson” being “stubborn, as usual” and keeping the aging Gene locked in prison.

[P.S.: I think I found the Lenin for Tykes book. Alas, it looks like I’m gonna have to learn Yiddish… Here’s the info: לענין װײזט דעם װעג /מױשע שעפריס. ]

….Plus another one that I’m putting on account for Volume Four: